They tell me you can’t go to Chicago and not try the deep dish pizza.  Well, you know me; I’ll gladly go the extra mile for the cause of enlightenment.  Actually, with half a dozen locations, I only had to travel six tenths of a mile to get to the nearest Pizano’s, which is on upper State Street (stay out of the Loop if you can, people).

So walking in the front door was an adventure in itself; the alcove has more decorations than a medieval Catholic apse, one picture on top of another all the way over your head and down the other side, all having something vaguely to do with pizza or the customers or I don’t know what all.  It’s a lost art form; what the ancients carved in stone we have in stickers and paper and tape.  I’d have studied it longer but it’s cold in January in Chicago, and besides I was there for the pizza.

I was greeted by Dean Martin, or rather his silver-haired twin, and shown to a table in the corner — the one with the best light, since I brought a book.  Also the best view.  Look at that bar, willya — you almost expect to see Norm and Cliffie at the far end.  Eight beers on draft, including a fine Sam Winter Lager, so that was a no-brainer choice right there.  And what you can’t see is the wall of celebrity photos behind me, which includes Ditka flipping off the camera.

First thing they’ll tell you about the deep dish:  It’s gonna take three quarters of an hour for it to come out.  So if you’re here on a date, you’ll want some bruschetta and maybe a glass of chianti to start off with.  But don’t eat too much.  (Me, I brought a book instead of a date; it’s cheaper that way.)

A quick thought about good service:  If your server pays attention and refills automatically without being asked, that’s nice.  But if he does it while smiling and chatting because he genuinely likes people, that’s Luis.  And Luis also knows how to prepare you for what’s about to come.

First comes the plate — clean and white, a blank canvas all ready for the art that’s soon to arrive.  Then three shakers: not just your parmesan and dried pepper flakes, but also an Italian herb blend that, if I had to guess, contained sweet basil, oregano, and something like tarragon.  Oh, the smell!  And if your mouth is watering just reading this, imagine mine…  And then, just at the moment I’m starting to wonder, it appears: 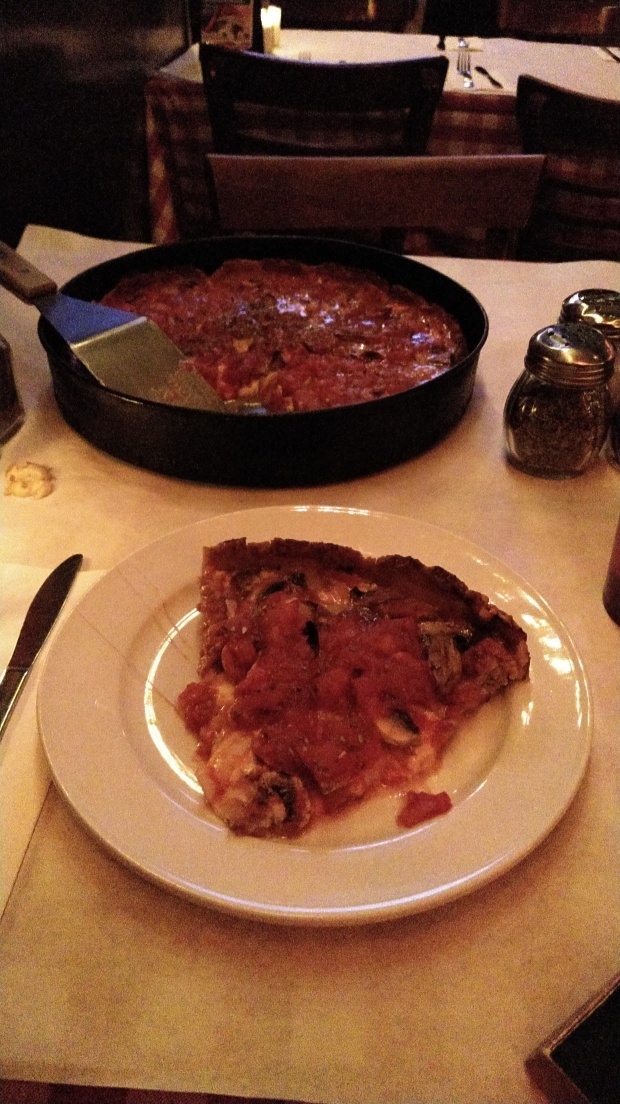 The first thing I didn’t know about deep dish is that you don’t pick it up.  There’s a fork and knife, and they’re there for a damn good reason.  I know; you’re proud, and you know how to eat pizza — don’t be.  Use the fork or you’ll make an ass of yourself in front of some very nice people.  What’s worse, you’ll spill sauce or some of that mmmm! gooey cheese.

The second thing I didn’t know is just how much pizza there is here.  Usually I can do justice to a medium pie all by myself, but this, I had all I could manage with four out of six pieces, and I did the unthinkable and left some of the pizza bones behind.  Oh! such grand crust.  Get the butter crust, people; you’ll thank me later.

Now, once the pie goes down to keep company with the bruschetta and the chianti and the oh-so-good beer, you’ll be tempted to get the dessert.  God knows I was tempted; a hot skillet cookie, serves two, with or without ice cream.  But discretion was the better part of valor this once; I have it on reliable authority that they’re wonderful, but I couldn’t manage it.

There’s so much more to tell you about this place, but I’m already way past 500 words.  So I’ll just mention the thin crust pizza is also the stuff of legends, there’s homemade ravioli, and the jukebox made me think of that John Mulaney bit, the way it played Elton John half the night and then switched to some sweet Billie Holliday.

Next time you’re in town, try this place out.  Tell them who sent you.  They’ll say, “Who?”