It’s a big photo, well-shot and finely detailed.  Blow it up a little and you can clearly see:  This is to the side of an open vehicle gate.  It is, as we can see from other photos, at a secure parking lot.  Not only does this section of fence hold nobody inside, there’s a great big wide-open hole right next to the cameraman.

If you’re unfamiliar with the subject matter, this is AOC on a promotional photo shoot from when she was first running for office.  She’s seen here weeping crocodile tears for the camera outside a temporary tent city set up for the processing of migrant asylum-seekers.

The Internet is making fun of her for having posed for the pictures.  Her office has issued indignant denials; that’s real emotion, they say.

Look, let’s get one thing clear up front — How do we know this photo op was staged?  Take a look at this: 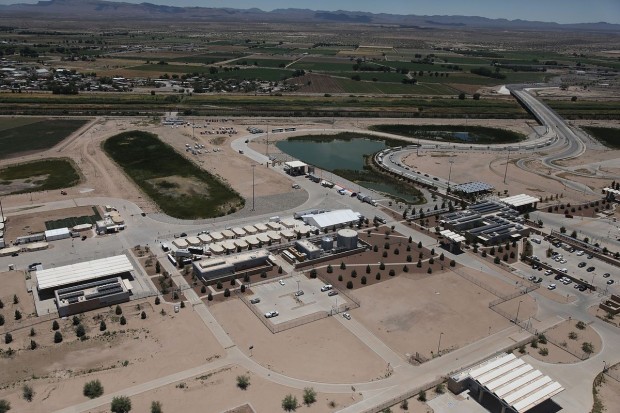 The migrant tent city is real; it’s that bit in the center.  (It was temporary, since torn down.)  Note the flimsy fence; notice you can walk around it on both sides.  I’ve got pics from other angles; it’s chain link, and not all that sturdy.  The portion of fence with hardened rectangular supports from the top picture is used for vehicle entrances; you can see it in the parking lot in the center here.  Amusingly, the photo op itself appears to have been staged at a utility entrance to the border crossing about half a mile away.

So not only was the fence keeping no people in, you couldn’t even see the migrant camp at the place where AOC apparently broke down in tears just in time to have some candid shots taken.

So it was a staged photo op.  That happens all the time.  Those pictures of people shaking hands with the President?  It’s not because he’s meeting you for the first time, sealing a business deal, or congratulating you on your sermon this morning.  No, they’re posed.  The White House has a large staff dedicated to creating photo ops and they’re good at it.  Up-and-coming politicians are the same, particularly when they’ve got the support of people with deep pockets.

Rep. Ocasio-Cortez is exactly the sort of young candidate that ought to be groomed by her party’s core, provided with plenty of funds, and given a professional staff.  She’s charismatic, witty, intelligent, and attractive — and, best of all, she’s a true believer who’s not above twisting the truth in pursuit of her chosen cause.  All of these are excellent — no, vital — qualities in a candidate for political office.

It’s true her image is that of a poor bartender living in a troubled district; she worked very hard crafting that persona.  She’s got credentials, including an excellent education.  And she’s quite evidently a talented actress, charismatic enough to convey not merely emotion but the very quality of being genuine even through the lens of a camera.  Being genuine is easy, but the ability to express it is a rare gift, and she has it.

Mark me well:  People like Alexandria Ocasio-Cortez are the future of any party that has one.  Republicans are only sore because she’s on the other side.

And who can deny the worth of her cause?  People have fled their homelands, traveled thousands of miles, risked their lives crossing river and desert and wasteland, and when they finally reach their destination, they’re viewed with suspicion and hatred because they failed to fill out the proper paperwork and wait in line while there was a civil war going on at home and they didn’t want to get shot.

I do take minor exception to her characterization of the migrant processing facilities as “concentration camps”; it’s a far-too-obvious appeal to Godwin’s Law.  Besides, concentration camps are for long-term housing; these are and always have been designed for rapid throughput processing.  So it’s inaccurate, imprecise, and deliberately designed to inflame sentiment in order to draw attention in advance of the upcoming campaign season.  It’s a trifle callous for my taste, even Malthusian, but then I’m not a politician.  Which is kinda my point here.

So AOC is not actually an honest straightforward everyday person.  Do we really want that sort in Congress?  They’d have their pockets picked, salaries hornswoggled, and return Amtrak tickets co-opted before they even get to their seats — particularly among all those failed lawyers in the House.  She’s a politician and she’s not truthful?  Oh, the horror!  We’ve never experienced such a curious beast as a liar holding public office!  What ever shall we do?

Forget about her crocodile tears for a minute and check your own.

(Top photo from Ivan Pierre Aguirre, published on Twitter.  Photo of camp from Getty Images published in The Atlantic and later apparently stolen for use in this article at ‘Curbed’; all rights reserved.)